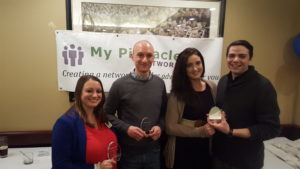 My Pinnacle Network, the business to business networking group with monthly meetings in Bourne, Braintree, Mansfield, Marshfield, Newton, and Westborough, MA, recently announced the winners of its third annual Networking Ninja Awards. The Networking Ninja Awards were created to recognize the region’s best networkers in four separate categories: Best Connector (helping bring people together); Most Ubiquitous (appears to be at every networking event); Most Altruistic (does most for others); and Brightest Beacon (adds energy to networking events).

Jim Hickox, owner of Apple Corps Cleaning Service of Weymouth took home the honors as Best Connector. He is a member of My Pinnacle Network-Braintree Third Thursday.

Michelle Resendes of Cape Cod Broadcasting Media in Hyannis won the Most Ubiquitous Networking Ninja Award. She is a member of My Pinnacle Network-Bourne.

David DeBlasio of DeBlasio New Media Marketing in Dedham won the Brightest Beacon honors for the second consecutive year. He is a member of My Pinnacle Network-Mansfield.

“We had a number of networkers nominated for these awards and these individuals stood out as the cream of the crop in our region,” said Steve Dubin, founder of My Pinnacle Network. “Each of these winners has proven themselves to be first-rate connectors who are givers first, which is how they ultimately receive referrals for their respective businesses.”

“We can’t thank Lois Drukman, Mark Roos and the rest of the South Shore Professional Networking Group for sharing their meeting night for our awards ceremony,” noted Dubin. “Networking really starts with giving and the SSPNG team exemplifies that philosophy.”